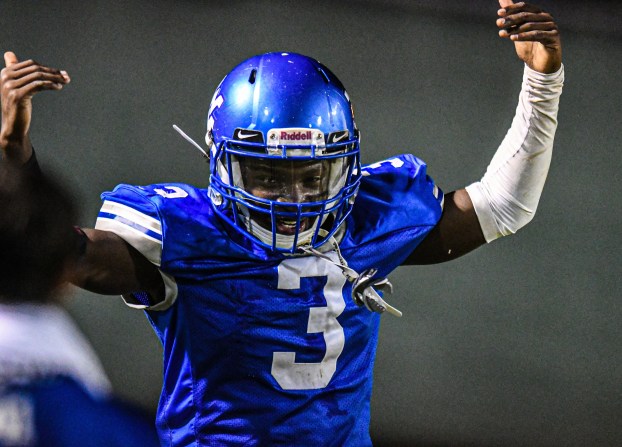 Water Valley’s Jaquerious Carothers (3) celebrates after returning an interception for a touchdown against Independence in Water Valley, Miss. on Thursday, October 8, 2020. The Blue Devils can clinch a spot in next month’s Class 3A playoffs with a win on Friday. (Bruce Newman)

This summer, the prospect of football being played at any level this fall felt like cautious optimism, but the calendar has turned to October and the season has entered the final push for the playoffs.

The postseason does not begin until November, but teams have the chance to punch their ticket this week and remove a little stress in the second act of the regular season.

Oxford and Water Valley have the ability to earn a berth to the postseason with wins on Friday, allowing the Chargers the chance to defend their Class 6A state championship. The Blue Devils are two years removed from ending a 28-year championship drought, but a victory this week gets them back to the Class 3A playoffs.

The chaos that is Region 1-5A has Lafayette’s postseason picture still not completely in focus. While Oxford and Water Valley can secure their postseason futures this week, the Commodores (3-2) will have to take care of business for another couple weeks before knowing their playoff fate.

Coming off a win over Center Hill last week, the Commodores are sitting at 2-1 in region play and have a two-game winning streak in the region after losing at West Point on Sept. 25. Lafayette is currently in a five-way tie for first place in the region with Center Hill, West Point, Lake Cormorant and Grenada.

This week’s challenge is not as daunting as the Mustangs and their triple-option offense, but the Commodores can’t allow winless Saltillo (0-5, 0-3 1-5A) to trip them up. Getting their defense back to focusing on a more normal offense than the one faced last week is something the Commodores hope is as easy as it sounds.

“I hope it’s like putting on an old pair of blue jeans,” said Lafayette head coach Michael Fair. “It will for our guys and even though we had guys scattered all over, our defensive staff made it sound like we’re in a base stuff almost. We’re just tweaking it.”

Oxford should be well rested after an impromptu Friday night off last week.

The No. 7 Chargers (5-0, 3-0 1-6A) got to prop their feet up after DeSoto Central forfeited their game due to a COVID-19 outbreak, forcing them to shut down for two weeks. With the forfeit, the Chargers extended their win streak to 18 and set themselves up to clinch a playoff berth on Friday.

Getting that ticket punched will be tall ask with the 2018 6A champion Horn Lake coming to Oxford. The Eagles are coming off their third straight win, defeating Olive Branch 26-10 last week. Since suffering back-to-back losses to Lafayette and Lake Cormorant to begin the season, the Eagles have found their rhythm and outscoring opponents 121-45.

After quick start to the season followed by some hiccups, Water Valley is back to their winning ways since entering the Region 2-3A portion of their schedule.

The Blue Devils (3-2) have won two straight games, improving to 2-0 in the region and setting themselves up to be in control of 2-3A the final two weeks of the season. All they need to do is handle their business at Holly Springs (1-5, 0-2) on Friday.

Getting their third straight win should not be an issue for a Blue Devils team that has not allowed Holly Springs to score a point against them for the past three seasons. Since 2017, Water Valley has defeated the Hawks by a combined score of 129-0, scoring an average of 43 points a game.