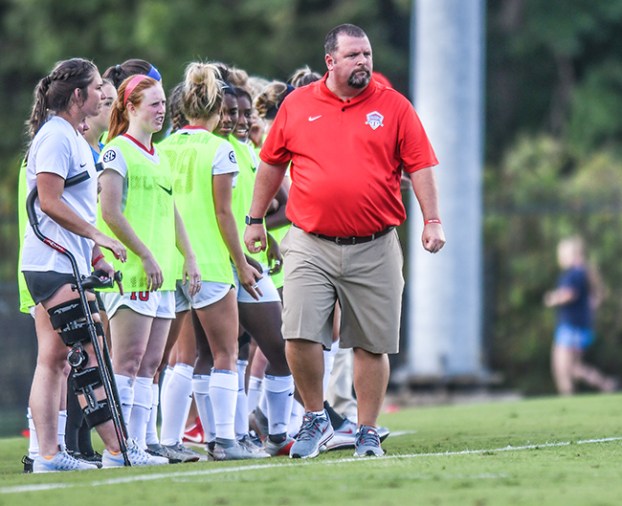 The focus on the upcoming athletic season is squarely on college football, and deservedly so, but there are other fall sports who are just as anxious about their seasons.

Ole Miss soccer coach Matt Mott said he is waiting to see what Southeastern Conference commissioner Greg Sankey decides for the fate of the fall athletic calendar just as much as Lane Kiffin and first-year volleyball coach Kayla Banwarth.

The soccer and volleyball programs may be more worried than football programs, as they start a full month sooner and still do not have any firm decisions in place.

Currently, soccer players report on Aug. 3 and begin preseason workouts on Aug. 4. That is still the schedule with the SEC having not made any changes to its fall calendar, yet.

Just as football has spring practices and a scrimmage, soccer is allowed to have a handful of spring games. Due to injuries and other variables, Mott and his staff decided to push their spring 2020 schedule back. That decision ended up hurting their development, with the COVID-19 pandemic causing sports to be shutdown in mid-March.

“No spring is tough,” Mott said. “We had a really good (spring) schedule and we pushed them all later in the spring, as we had some (players) coming back from injury. We were playing at a really good level, and when we came back from spring break was when we were going to start our games. So, we missed out on those games, which was difficult.”

With the season looming just weeks away, soccer schedules have begun to be altered due to other conferences already making moves regarding the fall. The ACC, Big Ten and PAC-12 conferences have already decided their fall sports will play conference-only schedules, if there is a fall season to be played. The Ivy and Patriot Leagues canceled their fall sport seasons altogether.

Ole Miss’s schedule was changed with the ACC’s decision. The Rebels were scheduled to host Miami on the Sunday of their opening weekend.

“Right now, we have a really good schedule, but I think the chances of changing are probably pretty high,” Mott said. “There’s a lot of unknown at this point. We’re trying to stay positive, but I’ll be honest with you, last Wednesday I was really down. I was pretty depressed of what’s going to happen and what it’s going to look like, with the Ivy announcement and all that kind of stuff. Then I just woke up one day and said, ‘I’ve got to control what I can control. I’m not the one making this decision and I’m going to trust our leadership.’ I got myself back into a really good mood. Whatever games we get, we’re certainly going to do the best we can.”

On Monday, that leadership met in Birmingham, Ala., with all 14 athletic directors meeting with Sankey and others at the SEC offices. The topic was the upcoming athletic year but no official decisions were made following the meeting that started early Monday morning and went into the late afternoon.

The idea of a conference-only schedule for SEC sports is on the table, along with other options, including the potential of a spring football season.

“It is clear that current circumstances related to COVID-19 must improve and we will continue to closely monitor developments around the virus on a daily basis,” Sankey said following Monday’s meeting. “In the coming weeks we will continue to meet regularly with campus leaders via videoconferences and gather relevant information while guided by medical advisors.”

Sankey went on to say that a decision in “late July” would provide the SEC with more clarity regarding the fate of fall sports.

Bianco: A full 2020 season “would have been fun to watch”

Mike Bianco hasn’t said much publicly about how the 2020 baseball season came to a screeching halt due to the... read more