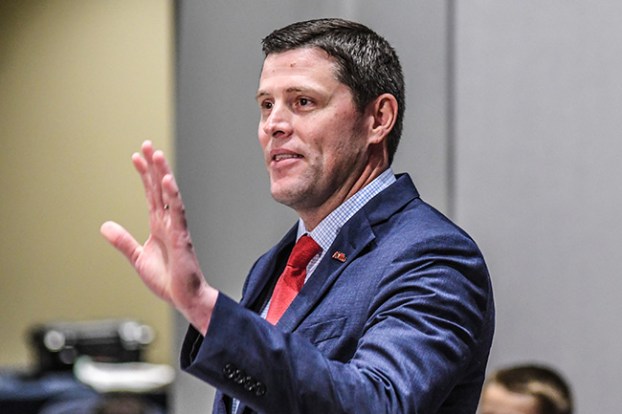 Keith Carter went to Washington on Wednesday to take part in the growing national debate, concerning whether student-athletes should receive compensation for the use of their name, image and likeness, or NIL.

The issue has gained momentum in Congress, and the Ole Miss vice chancellor for intercollegiate athletics participated in a hearing with the U.S. Senate Committee on Commerce, Science and Transportation. The hearing was titled “Exploring a Compensation Framework for Intercollegiate Athletics.” Carter was one of five witnesses, part of a group that also included Southeastern Conference commissioner Greg Sankey.

In his opening statement, Carter admitted a serious discussion of student-athletes profiting off their NIL must be had, and soon.

“I believe it is time for intercollegiate athletics to find a pathway forward,” Carter said. “Legislation of this magnitude dealing with a student-athlete’s personal image and how a compensation model could potentially be implemented must be done in a deliberate, thoughtful and inclusive manner, as it will shape the future of intercollegiate athletics.”

The hearing was led by committee chair and Mississippi U.S. Senator Roger Wicker. Roughly 11 other senators, including Ted Cruz, participated in person and virtually, asking the panel questions ranging from NIL issues to how colleges are handling the COVID-19 pandemic.

Midway through the hearing, Senator Marsha Blackburn of Tennessee asked point-blank if the members of the panel support the idea that student-athletes should profit for their NIL.

Everyone, including Carter, answered with a simple “yes,” except for Sankey whose answer was a not on such sturdy ground.

The rest of the panel consisted of Dr. Michael Drake, Ohio State president and a member of the NCAA’s Board of Governors; Dionne Koller, a law professor at the University of Baltimore; and Eric Winston, former college football and NFL player and current president of the NFL Players Association.

Each witness provided a written testimony to go along with their answers in Wednesday’s hearing. Carter’s testimony reaffirmed his stance from his opening comments. The seven-page written testimony laid out why Carter was in favor of formulating a proper framework for NIL compensation and provided the current financial assistance each student-athlete at Ole Miss receives with their scholarship.

“I, along with the University of Mississippi, generally support the recommendations to the NCAA Board of Governors regarding the modernization of the NIL rules,” Carter’s testimony read. “We likewise recognize that, while the Board has flagged multiple issues related to NIL, those issues warrant more analysis and development to ensure the effective administration and enforcement of any modernized rules.”

Wicker, who is a graduate of the University of Mississippi, said he wondered how far the NIL would go if change is made and how it could possibly be exploited. An example he posed was, if players began getting deals in their hometowns, that could possibly turn into pay-for-play scenarios. He also wondered how much of an effect social media would have on NIL change.

“If I had the money as a local businessman, I’d want to pay $100 to every member of the Ole Miss football team to tweet something out on my behalf. I wonder if that’s where we’re heading?” Wicker said.

The hearing slowly turned into a discussion on the coronavirus pandemic and the response college football programs have had, with players returning for voluntary workouts last month.

With programs across the country shutting down workouts as positive COVID-19 cases spike among their players and staff, the idea of a traditional fall season is looking less likely to start on time, if at all. Much like how the MHSAA is considering possibly flipping football to the spring, college has also looked at that option. However, both entities view it as a last-resort possibility.

“I think that was a scenario we talked about early on as we talked about all scenarios,” Carter told Ross Dellenger of Sports Illustrated following Wednesday’s hearing. “Obviously, it kind of died down as we brought student-athletes back, but I do hear that discussion being brought up more.”

Decisions at both the high school and collegiate level, pertaining to a fall sports season, are expected to be made this month, with football preseasons scheduled to begin in late July and early August.

The calendar is about to flip to July, meaning the 2020-21 high school athletic year is one month closer to... read more