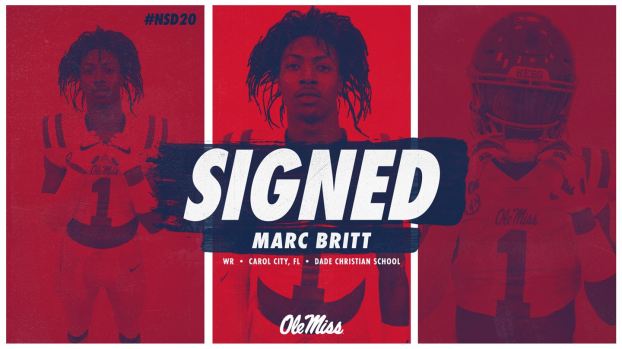 Lane Kiffin added another piece to his first recruiting class on Monday with the signing of a top wide receiver from Florida.

The school announced Marc Britt as an addition to the its 2020 signing class. Britt will join the Rebels this summer.

Britt, a consensus four-star recruit from Miami Christian School, is a 6-foot, 2-inch wideout who will add some depth to the Rebels’ receiving corps this fall. ESPN had Britt ranked No. 191 in their ESPN300 rankings of recruits.

As a senior at Miami Christian School last fall, Britt earned All-Dade County honors and recorded 1,352 yards and 15 touchdowns in 2019. Britt also played on the defensive side of the ball as a safety, and had four interceptions.

Before transferring to Miami Christian, Britt played for Carol City High School in 2018, a team that went 9-3 and was ranked No. 28 nationally by MaxPreps. Britt’s freshman and sophomore seasons were spent at Champagnat Catholic School in Hialeah, Fla. The two seasons with the Lions saw Britt make 53 receptions for 1,927 yards and 18 touchdowns.

Ole Miss is currently scheduled to open their season against Baylor in Houston as part of the 2020 Texas Kickoff on Sept. 6.

Sports have been non-existent for most of 2020, but last week in Mississippi, they made their biggest assist of the... read more