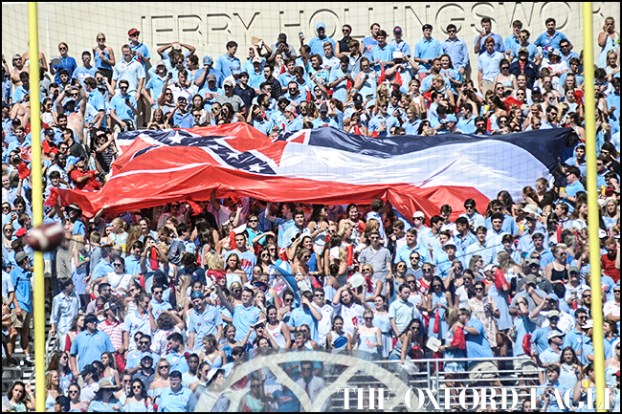 A Mississippi state flag is unfurled in the student section shortly before the kickoff of the Ole Miss vs. Alabama game at Vaught-Hemingway Stadium in Oxford, Miss. on Saturday, September 17, 2016. The SEC and NCAA issued statements following Sunday's vote to remove the flag as the official state flag. (Bruce Newman/Oxford Eagle)

Ten days ago, Mississippi was suddenly on the outside looking in when it came to hosting Southeastern Conference and NCAA championships, but that changed on Sunday.

Earlier in June, both the SEC and the NCAA made their feelings on the state flag very clear: Change it or lose future championship hosting opportunities.

The NCAA went as far as to expand their Confederate flag policy to prevent any NCAA championships taking place in states where the Confederate symbol was prominently placed. The Board of Governors’ statement explicitly noted that Mississippi was the only state affected by the change.

On Sunday night, following the historic vote by the Mississippi Legislature to take down the current flag, NCAA president Mark Emmert issued a statement that seemingly reversed the NCAA’s course.

“We are pleased the Mississippi legislature has acted swiftly to remove the Confederate battle emblem from the state flag, and we look forward to Governor Reeves signing this bill,” Emmert said. “It has too long served as a symbol of oppression, racism and injustice.

“We welcome this important move by state lawmakers to remove the symbol from prominence in the state, which will also open the opportunity to host NCAA championships after the recently expanded championship policy.”

The SEC did not go as far as the NCAA did, but commissioner Greg Sankey did issue a warning that the conference would be reconsidering any future hosting opportunities in Mississippi until a new state flag was selected.

Minutes after the Mississippi Senate voted to pass House Bill 1796, Sankey issued a statement and echoed the same sentiment as Emmert.

“I am proud of our universities’ leadership, and the engagement of student-athletes and coaches in the efforts to change the State of Mississippi flag,” Sankey said. “The agreement to remove the Confederate battle emblem from the flag is a positive and appropriate action, and I applaud the Mississippi House of Representatives and Senate for today’s action. I am also grateful for Governor Reeves’ openness to sign a bill to change the flag. As I have frequently said, our students deserve the opportunity to learn and compete in welcoming environments. Today’s action is welcomed in the spirit of this goal.”