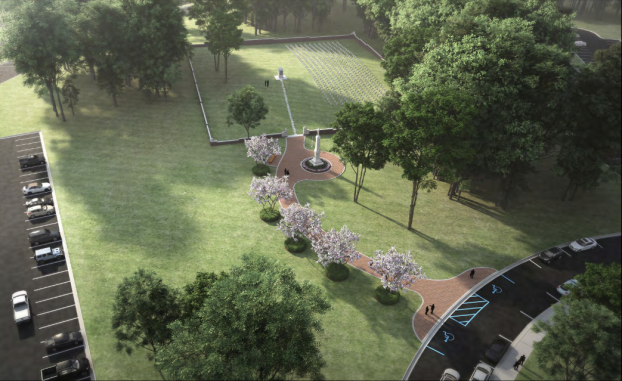 University of Mississippi Chancellor Glenn Boyce responded on Monday to the growing unrest over two renderings of the proposed Confederate cemetery renovations that were part of the relocation plan approved by the IHL's Board of Trustees last Thurday. Boyce stated there will not be a bench installed while the final plans regarding the headstones and the memorial for the U.S. Black Troops from Lafayette County are still being finalized. (University of Mississippi)

The University of Mississippi community celebrated the IHL Board of Trustees’ vote to approve the relocation of a Confederate monument on its campus on Thursday, but by Friday, some of that joy had turned to anger.

Once the plans were made public regarding the relocation of the statue from the Lyceum Circle to the Confederate Cemetery, a pair of renderings that depicted the cemetery being renovated into a space that some viewed as still glorifying the statue and the cemetery.

Arielle Hudson, one of the six Associated Student Body members who wrote the first resolution to be passed that demanded the statue be moved from its current location, saw the renderings on Thursday afternoon, just hours after the IHL vote.

“It was a very quick change of emotions,” Hudson said. “It wasn’t even 24 hours. I think everyone else saw them on that Friday, but we actually saw them on Thursday. We were just very disappointed. It kinda felt like a slap in the face, like we had been played. We knew none of this had ever come up in any meetings that we were in. We knew there could possibly be some kind of renovation to the cemetery as far as up-keeping, but nothing to the extreme of what we’re seeing in those renderings.”

The approved plan included two artist renderings that showed that the monument “will be accessible by a newly-laid brick path surrounded by trees and enhanced with lighting,” according to the plans. Security cameras will be added in and around the cemetery to allow for continuous monitoring by the University Police Department. Headstones marking the graves of confederate dead were also going to be added as part of the cemetery’s renovation, according to the plans.

The IHL also stated in its report, attached to the packet of last week’s Board of Trustees meeting, that “the proposed plan has received written endorsement from various campus constituencies.” Hudson told the EAGLE that she nor anyone else had ever seen the renderings and had not signed off on them. The ASB issued a statement on its social media accounts on Friday stating the IHL’s claim as “false.”

The statement ended with the phrase “Relocation, not Glorification.”

On Monday, Chancellor Glenn Boyce issued a statement and detailed messaged regarding the renderings and the unrest that had grown since Thursday.

“While those constituencies listed in the submission did approve the plan to relocate the monument to the cemetery, the placement of this statement in the document implies approval of the plan to add headstones to the cemetery, which was not addressed or approved by those groups,” Boyce said. “This is clearly an error and I will clarify this with the Board of Trustees.

“This is an historic accomplishment for our campus and I am saddened that my decision to move forward with the artist’s renderings is jeopardizing the excitement we have over the monument being relocated. I recognize the frustration with the process, but my intentions were to expedite the process to get the outcome that our campus shared governance leaders and external stakeholders fought so hard to accomplish.”

Boyce’s message discussed each point, in detail, pertaining to the privately funded relocation project. There will not be a grouted, brick paver sidewalk, according to Boyce – instead it will be stamped concrete. He also said no work will be done on the cemetery wall and no bench is in the submitted construction plan.

The landscaping that brought ire to many is an artist’s interpretation of the rendering, Boyce stated.

As it pertains to the cemetery markers, Boyce said one of the changes to the original plan that is “accurately reflected in the artist’s rendering” is the addition of headstones. Boyce said spoke with the Work Group for the Cemetery Headstone Project after it became clear there were “varying viewpoints” regarding the headstones.

“I am awaiting final determination of the final configuration of the exact placement of the headstones from the Department of Facilities Planning,” Boyce said.

Regarding the proposed memorial for the U.S. Black Troops from Lafayette County that fought for the Union Army, Boyce said he is meeting with the Work Group for the Troops Memorial again regarding its exact placement at the cemetery.

“Just as I was committed to seeing the monument relocated from the center of campus, I am just as committed to ensuring that the U.S. Black Troops from Lafayette County are recognized properly,” Boyce said.

Workers began placing a fence around the perimeter of the cemetery on Monday as construction was set to begin any day. Once the $1.15 million project gets underway it is estimated to take roughly 90 consecutive days for the statue’s relocation process to be completed.