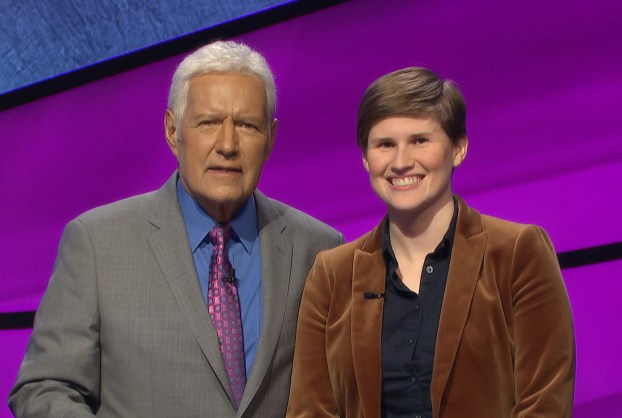 Felicity Flesher, right, stands with Alex Trebek during a taping of Jeopardy!. Flesher won her first two games to advance to the April 20 episode. (Courtesy of Felicity Flesher)

Felicity Flesher has tried numerous times to make her way to the Jeopardy! stage and, for her, the third time was truly the charm.

The Oxford native is currently riding a two-game winning streak and is set to face two new competitors later this month. According to Flesher, the path to get behind one of the infamous podiums and have Alex Trebek ask her questions involved a lot of trying, and trying again.

“I’ve taken the online test many times – I can’t even count how many times – and I’ve auditioned in person three times,” Flesher said. “It took until the third time, I guess, to get me on.”

Earlier this year, Flesher got a call that felt to her like it was going to be “the call,” and it turned out, it was. The show only gave Flesher a couple days notice, because some other contestants back out, and told her they were going to bring her in as an alternate.

Flesher now resides in Studio City, Calif., so she was able to get the Jeopardy! filming location quickly. The decision to accept the show’s offer was firmly hers to make.

Growing up, Flesher said she loved watching game shows like Jeopardy!, but never seriously competed in quiz bowls or other events in school.

“I just picked up little nuggets of trivia along the way,” she said.

The shows that Flesher competed on were taped in February, before the COVID-19 pandemic shutdown the country.

“You just kind of have to go into it thinking you know what you know,” Flesher said. “It’s really hard to cram or to study. Like, you can maybe memorize a few facts or whatever, but basically if you’ve made it this far, you’ve made it. Just try to relax as much as you can, and just have fun. I mean, when else was I ever going to get this opportunity?”

Flesher did admit to being “awestruck” in front of Trebek and the board, and said the board is as big in person as it looks on television.

Contestants were able to speak with Trebek, which is basically what people see on the show when he interviews them briefly. During the commercial breaks, Trebek will take a photo with the contestants.

“He was extremely lovely. Just a total pro,” Flesher said. “He talks with the audience a little bit during commercials and is very funny. There’s a reason he’s been doing it this long.”

Trebek, who is a year into his battle with stage 4 pancreatic cancer, did acknowledge it a little with the audience, according to Flesher.

Flesher’s parents, who are professors at Ole Miss, were not able to make it to the first two tapings but were able to make it for the third taping, due to a two-week hiatus between filming the second and third episodes.

“I loved having them and I wouldn’t have done it without them, but I tried to pretend that they weren’t there,” Flesher said. “The way you’re positioned on the stage made it so that I really couldn’t see them. They were kind of in my blind spot, which was a good thing, because I think it would have freaked me out a little bit with their presence. It was just wonderful getting to celebrate the experience with them.”

The next episode Flesher will compete on airs April 20. She won Final Jeopardy! to clinch the first two games and advance.

After cancelling all in-person instruction through the summer last month, the University of Mississippi canceled all in-person programming on Thursday.... read more