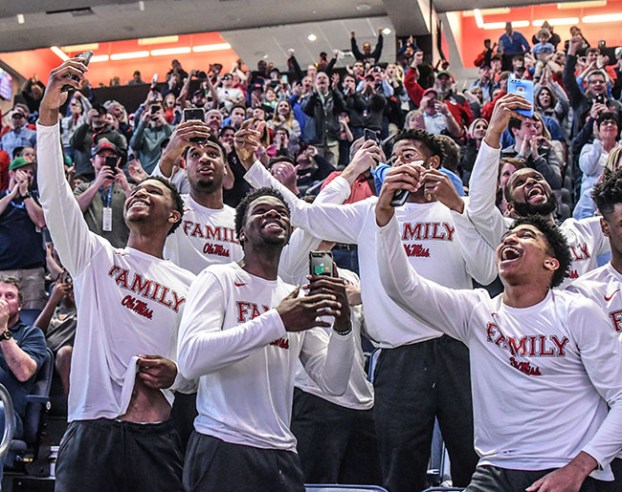 Mississippi players celebrate as they watch the NCAA Tournament selection show at the Pavilion at Ole Miss, in Oxford, Miss. on Sunday, March 17, 2019. (Bruce Newman, Oxford Eagle via AP)

I’m a football guy. Football has always been what drew me to sports and where the majority of my mental output falls. That said, this month is different. While October is incredible, college and pro football in full swing and MLB playoffs underway, nothing really compares to March.

No scripted drama can live up to the hype of the real-life show that occurs in the first 104 hours of basketball that will be played between Thursday and Sunday.

It’s the best four-day stretch in all of athletics. It’s the most bet (and most profitable) four-day stretch at Las Vegas sportsbooks every year. It’s also the most popular week of the year for men to get vasectomies. If you think I’m kidding, Google it – Athena Health did a study in 2017 and found a 30-percent bump in vasectomies the Monday to Wednesday leading into March Madness.

Remember when UCLA won 10 NCAA Tournament titles in 12 years? (I actually don’t remember this at all. I would’ve been negative-24 years old when the streak ended). But those days are gone. This is the era of madness. It’s literally more likely now for a 16-seed to beat a 1-seed – it happened last year for the first time – than it is for a team to win back-to-back titles, let alone win 10 of 12 titles.

Instead of monotonous predictability, we remember the obscurity that has become commonplace. We remember 2006 George Mason and 2011 VCU making the run from 11-seed to the Final Four. We remember Butler making it to back-to-back championship games as a 5-seed and 8-seed.

Blue Bloods have lost in the ugliest of fashions, and 98-year-old nuns have become household names. Schools like Duke, who’ve won five national championships, have been upset in the first round twice in recent memory. Schools where you have to go to the internet to look up where and what they are – think Bradley in 2006 and Davidson in 2008 – have not just won games but strung together wins in March.

Last year, for the first time in the history of the NCAA Tournament, a 1-seed lost to a 16-seed. However, that’s just a continuation of a growing trend that should excite the underdog. Since 2010, three 15-seeds have beat 2-seeds, six 14-seeds have beat 3-seeds and seven 13-seeds have beat 4-seeds.

But here’s the number for Ole Miss. How many times have 8-seeds or 9-seeds beaten the 1-seed in the second round? 19 times. Statistically, an 8-seed has a 9.6-percent chance to win their first two games. It’s not impossible.

Now 2019, Ole Miss is marching to the madness for the first time since 2015. Like wild occurrences discussed above and dozens of others forgotten or left out, anything can happen for the Rebels, yet Ole Miss fans always seem to expect the worst.

I sympathize with Ole Miss fans. A Vanderbilt graduate myself, my school has gone to the NCAA Tournament just nine times in my lifetime, making it as far as the Sweet 16 twice. And let’s be honest, I couldn’t care less about Vandy before 2012 – they’ve made it twice since I showed up on campus, never getting out of the first round. This year, my Commodores went 0-18 in SEC games. We’re in this together, Ole Miss fans.

But here’s the thing about the NCAA Tournament – nothing that happened from November until now matters. It’s the beauty of March. It’s why the moniker of March Madness exists. Anything can happen when the tournament starts. Heck, I’m sure by the time you’re reading this on Friday, that four or five teams won games they ‘shouldn’t have won’ on paper.

Kermit Davis’ history proves he’s capable of winning those games. Davis coached one of those three 15 over 2 games. A 15-seed in 2016 at Middle Tennessee State, Davis’ Blue Raider team knocked off Tom Izzo’s 2-seeded Michigan State Spartans. Anything is possible in March.

Which brings me to my point, my plea. Just enjoy this. Making it to March isn’t a given. Don’t doubt or be cynical. Will Ole Miss make it out against Oklahoma? I don’t know. Maybe. Will they beat UVA if they do get by Oklahoma? Probably not. But there’s a chance. Bet on that chance. Embrace that chance. Make some memories in March, based on that chance.

OXFORD – In a match that seemed over from the start, with Cleveland Central forfeiting three matches to the Commodores,... read more