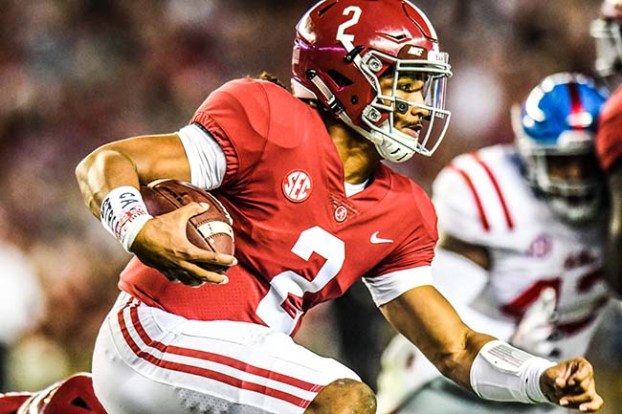 ATLANTA (AP) — Wondering if Alabama or Georgia will win the National Championship 2018?

Those kinds of matchups tend to work out pretty well for the fourth-ranked Crimson Tide, which shuts down opposing ground games better than anybody.

Only Auburn in the regular season meeting has truly contained Nick Chubb and Sony Michel. With the nation’s top defense, Alabama is well equipped to at least defend them well enough to win Monday night’s national championship game at Mercedes-Benz Stadium.

Leading that charge will be linebacker Rashaan Evans, safety Minkah Fitzpatrick and defensive tackle Da’Ron Payne. Payne is ready to get back to doing what he does best after a Sugar Bowl interception and touchdown catch.

“I’ve just been trying to focus on being dominant up front, for real,” Payne said.

Being dominant up front, on both sides of the ball, has been a big part of Alabama’s success under coach Nick Saban. This team’s no different.

Alabama also has a veteran secondary to contend with the passing of Georgia quarterback Jake Fromm. Fromm has had a terrific freshman season, but he struggled when Auburn’s defense held Chubb and Michel to a combined 48 rushing yards.

The Tide does have to replace yet another starting linebacker with Anfernee Jennings out with a knee injury sustained in the Sugar Bowl win over Clemson. That leaves probably Terrell Lewis or Jamey Mosley to start.

Linebacker Mack Wilson was already a first-time starter in the Sugar Bowl and had a pick six and a career-high six tackles.

“Once we lose one man, it’s the next man up,” Tide defensive lineman Isaiah Buggs said. “Alabama recruits the best of the best so you always have to be locked in and ready to go, because you never know when it’s your time. Having Mack Wilson step up and have a bigtime game, everybody on the defense trusts him and I think he’s going to have another big game.”

Offensively, Alabama has playmakers like quarterback Jalen Hurts, tailback Damien Harris and wide receiver Calvin Ridley. The Tide does have to replace guard Lester Cotton, who suffered a knee injury in the semifinal game.

If history holds up, Alabama will have an edge in another regard. Saban has a perfect track record against former assistants like Georgia coach Kirby Smart. He’s 11-0 and none of them have come closer than 17 points against his Tide teams.

Saban has also had a full year to emphasize to his team “Don’t waste a failure” since a title game loss to Clemson. Alabama is a slight favorite for this game, just like in the semifinals, but can summon up a little extra motivation from critics of the Tide’s choice over Big Ten champion Ohio State for the final playoff spot.

It all worked to the tune of a 24-6 win in the playoff rematch with the Tigers.

“The real challenge will be, can we duplicate that kind of energy in this game,” Saban said.

It’s time for the NFL Playoffs 2018 and the Super Bowl 2018, crowning the next champion in pro football. When... read more