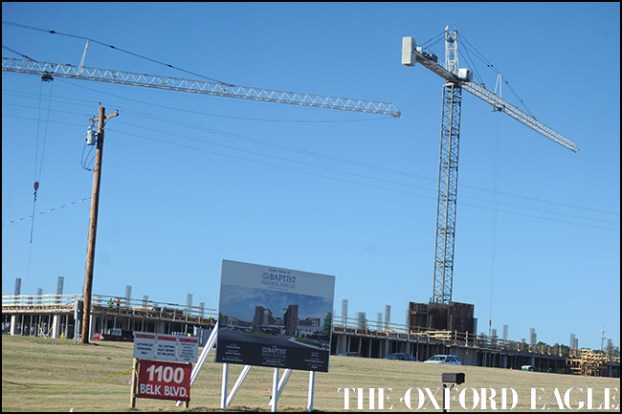 Construction continues on the new Baptist Memorial Hospital-North Mississippi on Tuesday. A medical office building will be constructed on 1 acre of land adjacent to the hospital.

Medical complex to be built next to new hospital

After being assured a medical office building will be constructed near the future Baptist Memorial Hospital-North Mississippi, the Lafayette County Board of Supervisors agreed Monday to grant a right of first refusal to BMH officials in order for them to enter into an agreement with a third-party developer to construct the facility on 1 acre of adjacent property.

Under the sale agreement of the hospital, Baptist agreed to construct a medical office building in addition to a replacement hospital. The new hospital and the medical campus next to it are subject to covenants such as a right of first refusal for the county and the city. The city will discuss the topic tonight at its Board of Aldermen meeting.

“Baptist is considering leasing 1 acre of the property adjacent to the hospital in order to build a medical office that will be built by a third-party developer,” O’Donnell said.

Greg Duckett with Baptist Heathcare Corporation said BMH would “still hold the ground lease to the property. We would in turn lease it to this third party, Duke Realty, and they would build this medical office building.”

The reason BMH is asking for the partial release is because Duke Realty is a publicly traded real estate investment trust. “In order for them to put this property in their portfolio of properties, they have asked that the restriction be released,” Duckett said. “It is strictly a procedure to allow Duke Realty to obtain its financing so it can construct this medical office building.”

Supervisor Mike Pickens asked if Duke Realty was planning to sell the building or rent it out.

Duckett said Duke Realty will sub-lease office space to physicians that are not in competition with BMH, which is also one of the covenants that was negotiated with the sale of the hospital.

Duckett said if Duke Realty is unsuccessful in renting the space to physicians, BMH has an obligation to offset that expense.

Duckett said BMH is trying to meet deadlines to get the building constructed and open. He said the final terms of the negotiations should be complete within 30 to no more than 60 days.

“You have fallbacks in place to ensure that Duke wouldn’t do anything contrary to Baptist as far as anybody that would be an adversarial person or agency coming in against Baptist?” Pickens asked.

“Let’s say Duke takes their lease and becomes Bass Pro Shop,” O’Donnell said. “The county and city would consider that a breach of our agreement with Baptist and a violation of our covenants.”

The horror of Oxford City Hall

If you visit City Hall in Oxford, the elevator inside will only take you to the second floor. There’s a... read more