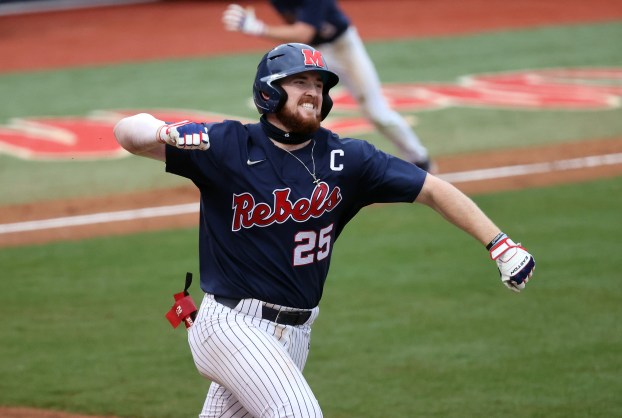 Ole Miss third baseman Tim Elko (25) celebrates after hitting a RBI-single in the bottom of the ninth inning for the walk-off win against Central Florida in Game 1 of a doubleheader at Oxford-University Stadium. The No. 1 Rebels won Game 1, 6-5, but lost, 7-2, in the second game. (Joshua McCoy/Ole Miss Athletics)

Tim Elko returning to Ole Miss for “one last ride”

Tim Elko’s story at Ole Miss is not over just yet.

The Rebel infielder announced his intention to return to Oxford for “one last ride” in a tweet on Tuesday. Elko’s return means the Ole Miss captain will follow up his 2021 season, which was one of the more compelling stories in college baseball this spring.

After having a career month in March, earning a National Player of the Month honor, Elko suffered an ACL injury in early April that seemingly ended his season and possibly career.

Less than a month later, Elko returned to the lineup in a pinch-hitter role. He slowly continued to show signs of improvement and moved into the designated hitter role for the final month of the season.

When Elko returned to the lineup he went 16-for-54 (.296) at the plate for seven home runs and 19 runs batted in. During the Oxford Regional last month, Elko hit two grand slams to help send the Rebels to their second straight Super Regional appearance.

With Elko returning, the Rebels retain a lot of their production on offense for the 2022 season with Jacob Gonzalez, Hayden Dunhurst, Justin Bench and Kevin Graham also returning.

The two top arms on the Ole Miss pitching staff from 2021 are officially not returning. A day after Gunnar... read more