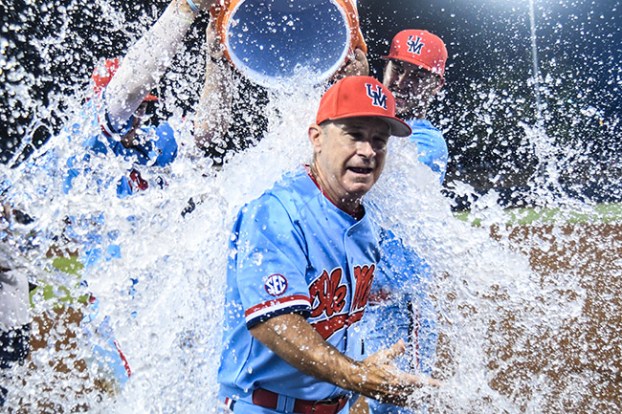 Mississippi head coach Mike Bianco gets a water bath following a win over Jacksonville State in the NCAA Oxford Regional at Oxford-University Stadium in Oxford, Miss. on Monday, June 3, 2019. Bianco was named the Division I Coach of the Year by Collegiate Baseball on Tuesday. (Bruce Newman, Oxford Eagle via AP)

Mike Bianco returning to Ole Miss: “I am committed to bringing championships to Oxford”

The week-long uncertainty regarding Mike Bianco and the Ole Miss baseball program has come to an end.

The Rebels winningest coach in program history will return for a 22nd season as the school announced Bianco’s contract was extended to four years — the maximum allowed length in Mississippi.

Since Ole Miss was eliminated from the NCAA Baseball Tournament last Sunday by Arizona, a cloud has hung over Oxford-University Stadium regarding Bianco’s status. Sunday’s news removed that cloud.

“Ole Miss is home for me and my family, and I am committed to bringing championships to Oxford,” Bianco said in a statement. “I’m proud of what we have accomplished over the past 21 years, and I look forward to building on that foundation and achieving new levels of success. I want to thank Rebel Nation for their unmatched support, year in and year out, and how they help make Swayze Field the greatest experience in baseball.”

Adding to the uncertainty was the recent opening at LSU following Paul Mainieri’s retirement after this season. Bianco, a former player and assistant coach at LSU, has been tied to the job opening since Mainieri’s announcement. Former Rebel assistant coach and current East Carolina head coach Cliff Godwin has also been reported as a front runner for the job.

Ole Miss athletics director Keith Carter has been vocal of his  support for Bianco and how he led the Rebels this season to a second straight Super Regional appearance despite the setbacks with injuries throughout the year.

“Mike Bianco is our head coach, and with his contract extended to the maximum four years, we look forward to seeing him lead Ole Miss to new heights,” Carter said in a statement. “We understand that the consistent success of our program will generate interest from other schools, and with any coach, there can be personal factors that come into play. Mike and I have been in constant contact and have been able to privately sort fact from fiction. Our program is poised to take the next step toward success in Omaha, and we believe Coach Bianco is the right person to guide us there.”

You may not know about Pickleball, but it’s an increasingly popular sport here in LOU and throughout the country. Neil... read more