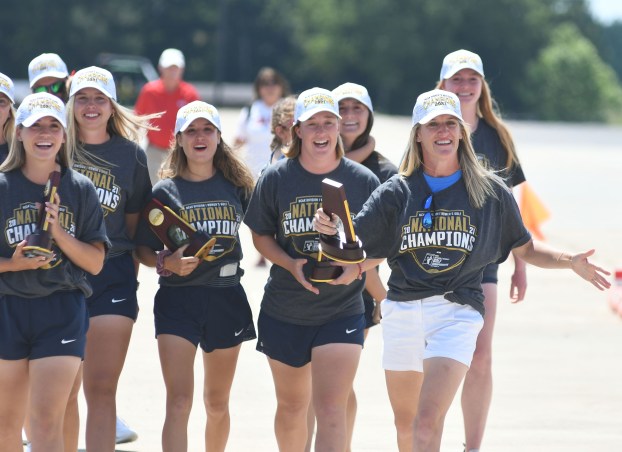 The Ole Miss women’s golf team celebrates its national championship with a parade in Oxford, Miss. on Thursday, May 27, 2021. Head coach Kory Henkes, far right, was named the WGCA National Coach of the Year on Thursday. (©Bruce Newman)

The postseason awards continue to fly in for the Ole Miss women’s golf team following its first national title in program history.

Henkes becomes the first Rebel head coach to earn the award from the WGCA. It also marks just the seventh time the award has gone to an SEC head coach since the honor was first handed out in 1984.

Ole Miss finished in fourth place or better in nine of the team’s 10 tournaments during the 2020-21 season, including first place finishes at the East Lake Cup and Gators Invitational.

The top five Ole Miss single-round averages throughout a season have all come during Henkes’ tenure, including the 2020-21 mark of 289.4, which ranks second in program history. The nine top 5 team finishes during the 2020-21 season is also a new school record.

Under Henkes’ guidance Johnson finished the season ranked No. 8 individually in the NCAA by both Golfstat and Golfweek and led the team in stroke average (71.34). Johnson tallied five top 5, eight top 10 & nine top 20 finishes this season, including a fifth place individual finish at the NCAA Championship.

For the first time since his arrival at Ole Miss, head football coach Lane Kiffin will be visiting fans on... read more