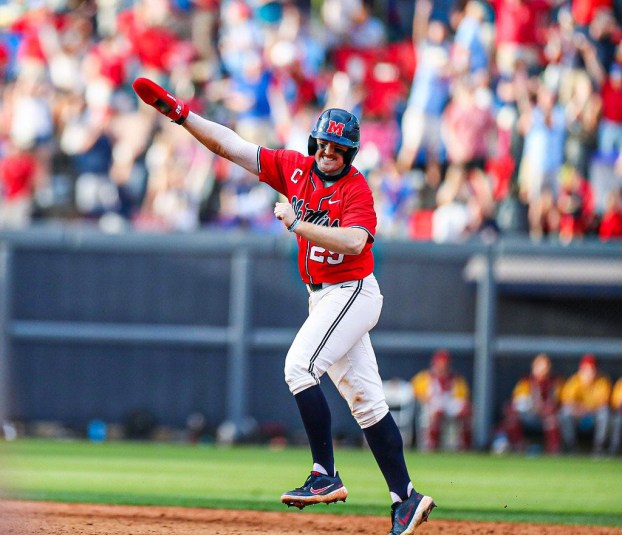 The No. 3 Ole Miss baseball team got over their first conference-series loss this past weekend with a blowout win over North Alabama on Monday, but it may have come a hefty price.

During the fourth inning of the Rebels 20-6 win over the Lions, Tim Elko suffered a knee injury on what started out as a routine groundout but became potentially catastrophic for the Ole Miss captain.

While dodging out of the way of  North Alabama first baseman who was diving after an errant throw, Elko seemed to tweak his right knee as it buckled. Elko crumpled to the ground behind the first base bag immediately.

Following the game, Ole Miss head coach Mike Bianco did not have any preliminary prognosis but stated Elko will undergo an MRI and other tests on Tuesday to further evaluate the injury.

“Just a weird play at first and a throw up the line,” Bianco said. “He was avoiding the first baseman and twisted the knee and was in some pain so we got him out of there.”

Elko went o-for-3 in the game as Ole Miss improved to 22-6 on the season. He was coming off a career-month in March where he had a .424 batting average with 33 runs batted in off eight home runs and seven doubles. Prior to March, Elko was hitting sub .100 during the Central Florida series at the end of April.

“Whenever one of your star offensive players goes down there is always a lot of concern,” Bianco said. “There’s not much I can say right now, we’re just hoping he’s okay.”

Ole Miss continues their six-game homestand on Tuesday, hosting Alcorn State at 6:30 p.m. CT before welcoming No. 2 Arkansas to town for a crucial three-game series starting on Friday.

The Ole Miss baseball team quickly avenged their lone blemish in conference play on Friday. After losing 4-1 to No.... read more