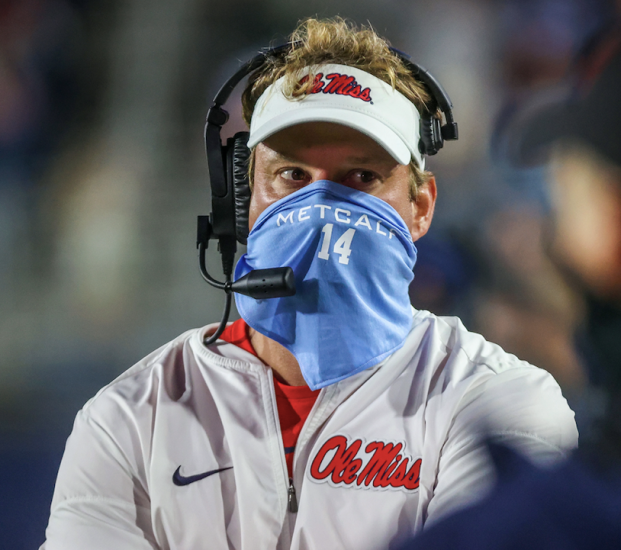 Ole Miss currently does not have a game scheduled for this weekend anymore, but it could be filled by Monday night with an in-state rival.

The Southeastern Conference announced on Monday morning that the Rebels’ game at No. 6 Texas A&M scheduled for Saturday is postponed due to the Aggies’ ongoing issues with COVID-19, which also caused them to postpone last week’s game against Tennessee.

The Aggies and Volunteers are making up that game on Dec. 12, which leaves little wiggle room for the Rebels to make up their game before the season ends on Dec. 19. The SEC office approved Dec. 19 as a date where games postponed due to COVID-19 could be made up if it did not involve the two division winners, as that is also the date of the SEC Championship game in Atlanta.

Lane Kiffin told the media during his regular Monday press conference he did not feel confident that game will be made up. Ole Miss athletics director Keith Carter was more hopeful their game with the Aggies will still be played.

“I think we’re going to make every effort to make up the game,” Carter told local media on Monday. “We’ll see how the dates play out. …I think we want to play the game. I think that’s been important and our league’s talked a lot about that. Finding ways to get the games played. I think our players want to play. I know everyone wants to play, it’ll just all come down to do you have the dates.”

Currently, Ole Miss has their second open date in the last three weekends. The Rebels played South Carolina last Saturday after coming off their scheduled open date on Nov. 7. Kiffin said they are still deciding how to treat the rest of the week, either as a normal game week without a game or as another bye week.

The SEC also approved the option of teams filling their surprise open dates with future opponents on their schedule, if both teams are healthy and can play. Those two would be Mississippi State and LSU. Currently, the Egg Bowl is set for Nov. 28 at 3 p.m. CT and Ole Miss is set to travel to Baton Rouge on Dec. 5

A surprise Egg Bowl or an earlier trip to Baton Rouge this weekend all hinges on if both the Bulldogs and Tigers are able to field a team or if their opponents of Georgia and Arkansas are unable to play come Saturday.

Ole Miss will know by 8 p.m. on Monday what the rest of their 2020 schedule will look like.