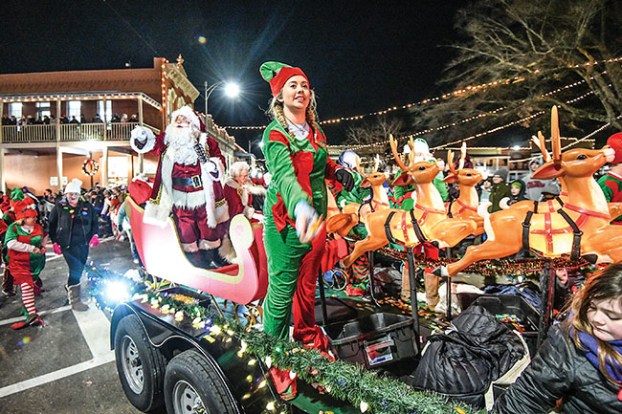 Mary Paxton Heiskell is an elf during the Christmas Parade in Oxford, Miss. on Monday, December 2, 2019. (Bruce Newman, Oxford Eagle)

Oxford Christmas Parade will happen — with some changes

Oxford is still planning to celebrate Christmas in 2020, but the annual Christmas Parade is going to look a little different due to COVID-19.

The parade, which is held on the first Monday in December, will be a drive-by parade on Dec. 7. It is a change from the traditional parade route from North Lamar Boulevard to the University of Mississippi Campus. Last year, the route was flipped to help accommodate the large number of participating floats.

“Parades and pandemics are a little hard to combine, unless you get creative,” Oxford Mayor Robyn Tannehill said in a video announcement posted to Facebook on Friday. “Instead of watching the parade go by, you’ll go by the parade.”

From 5:30 to 8 p.m. at mTrade Park, residents will be able to drive by participating floats and performances. The event is being presented by the North Central Mississippi Realtors, City of Oxford and the Oxford Lafayette County Chamber of Commerce.

Further information will be posted to the NCMR and City of Oxford’s Facebook pages this week, including how to apply to participate. The application fee will be waived for this year, but sign ups are on a first-come-first-served basis until all the limited spots are filled.

“We need the community to embrace this event and help us make it a great experience again this year for kids and adults alike,” Tannehill said.

Despite not being able to ride through the Downtown Square and throughout Oxford, Tannehill said Santa Claus is still scheduled to make an appearance at this year’s drive-thru parade.

Halloween events taking place in the LOU beginning this weekend

Despite COVID-19 putting a pause on many traditional holiday events and activities, Halloween in Oxford is still set to go... read more