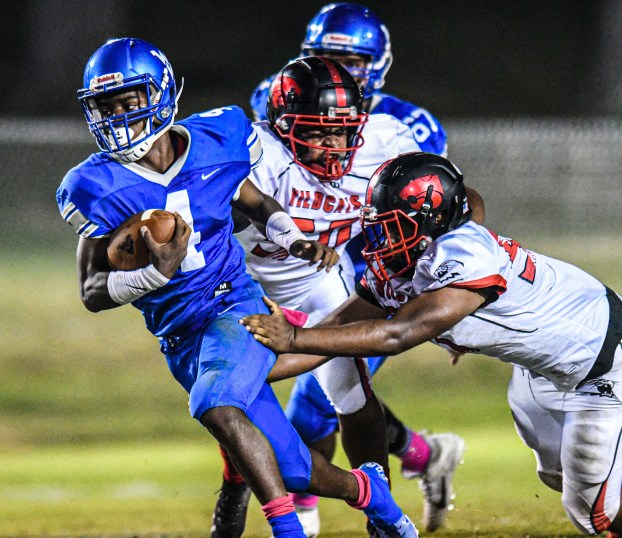 Water Valley rallies back to stay perfect in region play

WATER VALLEY- The second game of division play came a little earlier than expected for Water Valley and Independence this week as the game was rescheduled to Thursday night due to Hurricane Delta.

Water Valley started the game slow as Independence capitalized on mistakes to take the early 12-0 lead. The young Blue Devils never quit, scoring 21 unanswered points and rallying for the 21-12 win.

Water Valley (3-2, 2-0 2-3A) could not stop the Wildcat rushing attack in the first half. Independence (2-3, 1-1) struck first with a rushing touchdown from eight-yards out to make it 6-0. The Blue Devils would then fumble the ensuing kickoff, leaving the Wildcats in prime scoring position once again. Blue Devils’ Marion Morgan intercepted the ball in the end zone to keep the Wildcats off the board for a second time in the first quarter.

The Wildcats then scored in the second quarter from 12-0, following a Blue Devil turnover on downs. What looked like was going to be a blowout early with the Wildcats having all the momentum quickly turned back in the Blue Devils’ favor when Que Carothers picked off the Wildcat quarterback and returned it for a touchdown with 25 seconds left in the half.

The Blue Devil defense returned to the field in the second half and shut out Independence the rest of the night, forcing the Wildcats to turn the ball over on downs three times.

The Blue Devil offense capitalized on great field position after a short punt by the Wildcats when CJ Telford connected with Colby Lafayette for a 46-yard touchdown to make it 14-12. The Blue Devils put the game out of reach when Jaden Morgan ran in for a 7-yard touchdown for the final margin.

“All wins are good. You know it was an up and down battle, had to survive,” Embry said. “We just had to get to the half and make adjustments. The kids never quit. They didn’t play perfect, I didn’t call a perfect game, but we won, and now we get to work to get better for next week.”

Water Valley is currently in a tie for first place in Region 2-3A with North Panola. The Blue Devils will continue region play next week as they travel north to play Holly Springs.

A win against the Hawks will guarantee a spot in next month’s Class 3A playoffs as the Blue Devils will not mathematically finish lower than fourth in the region.

A pandemic and a potential natural disaster has altered the Week 6 schedule for MHSAA football. Oxford is getting the... read more