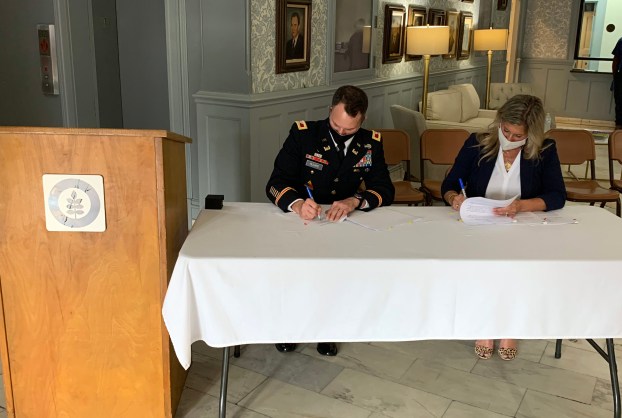 The city and the Vicksburg District of the Army Corps of Engineers signed a Project Partnership Agreement (PPA) on Sept. 15, which will help rehabilitate Oxford’s water distribution through the design and construction of a water supply and treatment project.

The proposed work will include replacing and rehabilitating wells, pipelines, pumping stations, treatment plants or other related components of a water supply, distribution, collection and treatment systems.

“This project will advance the city’s water infrastructure to address current and future demands of this vital resource,” said Mayor Robyn Tannehill. “Lafayette County is one of the fastest growing counties in the state. People see the cars on the roads and the construction going up but rarely think about the infrastructure in place underground. …and if they do think about it, it’s probably because there is a problem.”

Authorized by the Water Resources Development Act of 1999, the Section 592 Program assists non-federal interests in Mississippi. Assistance can include design and construction for water-related environmental infrastructure, as well as resource protection and development projects. According to PPA regulations, assistance may be provided only for projects that are publicly owned, and the non-federal interest must enter into a written cost share agreement to furnish its required cooperation for the project. The cost share for this project will be 75 percent federally funded and 25 percent non-federally funded.

The Corps, through the Sec. 592 program and the signed agreement with the city, will be allowed to provide reimbursed grant funds for the water treatment project in the amount of $1.7 million with a minimum local match by the city of 25 percent, or $567,000.

Theatre Oxford is getting back onstage next month and earlier this week, announced which show will be performed. In celebration... read more