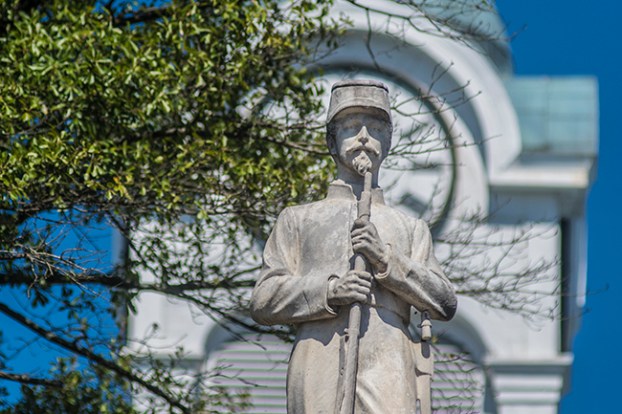 The Confederate statue overlooks the Square in Oxford, Miss. on Tuesday, October 3, 2017.

The Lafayette County Board of Supervisors met on Thursday to discuss whether or not to meet with Oxford’s Board of Aldermen to discuss ownership of the Confederate statue that sits on the Square.

The board went into an executive session at the meeting and, according to Brent Larson, Supervisor for District 1, they had not reached a decision on if they will meet with the Board of Aldermen or not.

The Board of Aldermen sent a letter to the Board of Supervisors on Aug. 18, claiming that in May 1868 the Lafayette County Board of Police, which is what the governing board was called, conveyed “that portion of the County property known as the Public or Court Square” to the governing authorities of the Town of Oxford “in fee simple forever.”

According to the agreement, the conveyance called upon the Town to repair, maintain and apply its ordinances to the Square. The agreement also hinged on the Town of Oxford to convey the property back to Lafayette County if it requested the same for construction of a new courthouse, provided the County repaid the Town for it’s expenses in repairing the Square.

On July 6, the Board of Supervisors held a surprise vote that was not on the agenda. They voted to leave the statue where it was. The vote came after a public discussion at the Chancery Courthouse amid the public protests to have the statue removed.

The Oxford Film Festival recently wrapped up their 2020 event, which pivoted to the virtual world due to the COVID-19... read more