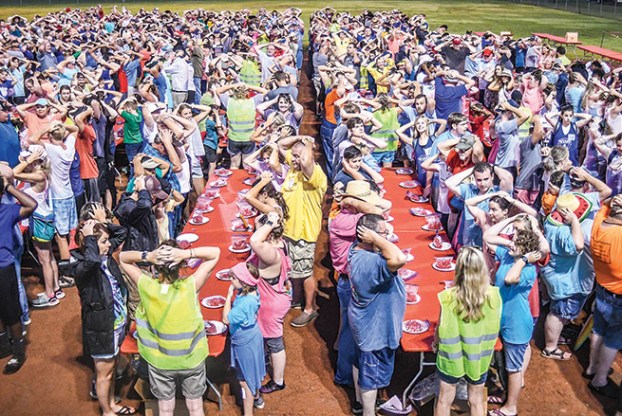 Contestants get ready to participate in a watermelon eating contest during the 50th annual Watermelon Carnival in Water Valley, Miss. on Saturday, August 3, 2019. Water Valley has officially set the Guinness World Records mark for the Largest Watermelon-Eating Contest with 754 participants competing simultaneously, beating the record set in 2018 in Safety Harbor, Fla, which had 259 participants. (Bruce Newman, Oxford Eagle via AP)

The City of Water Valley is officially the king of watermelons.

Word recently came down from the Guinness World Records office that last year’s watermelon eating contest held during the town’s 50th Watermelon Carnival was now the world’s largest, with more than 740 participants.

The official number of participants was 745, nearly tripling the previous record holder. The town of Safety Harbor, Fla., which had 259 people eat watermelon simultaneously during an event in the summer of 2018, previously held the world record.

“I think I was expecting them to email me back and have a list of a hundred questions or something, instead of emailing me back and saying, ‘You now are the world record title holder,'” Eubanks said. “I guess I was alarmed. I wasn’t looking for that email. I was overly excited when it was done, I guess, because there was nothing left to do.”

Getting the confirmation from the Guinness office was anticipated to take close to a year, due to the thorough process that takes place in confirming world record attempts. Eubanks corresponded with the Guinness World Record office via email every few weeks to check on the progress until two weeks ago, when she was informed they were at the top of the list of events to be confirmed. Due to the COVID-19 outbreak this spring, Eubanks said it took a little longer than she expected.

During the 10-month waiting period, Eubanks said she never had to get online to search to see if anyone else had attempted to set the watermelon record, as she was able to log onto the Guinness website, and it continued to show Water Valley was the only town to have attempted the record since the 2018 event in Florida.

Upon completion of the event last August, Eubanks began the process of submitting what she said were “thousands” of photos along with video footage and paperwork, documenting all of the participants.

Last year, a summer afternoon rainstorm hit Water Valley about an hour before the event took place, causing some people to leave, but most stayed to participate.

“I think if it hadn’t have been for the rain, I think we would have had a thousand people,” Eubanks said. “I do think the rain held off many people.”

While Water Valley was hit with good news pertaining to the world record attempt, the Chamber of Commerce provided bad news for this year’s Watermelon Carnival. The 51st Watermelon Carnival was canceled last week due to COVID-19 and current safety guidelines.

“We have decided to cancel this year’s 51st Annual Watermelon Carnival following guidance from the Center for Disease Control and Prevention (CDC), city, state and other government officials,” the Chamber’s statement read. “With the guidelines suggested, the determination was made that they could not be followed in a safe and healthy manner. For this reason, the unfortunate decision has been made to cancel the carnival.”

Special t-shirts are being made and will be sold at a later date, while two of the carnival’s staple events will still take place. Both the Largest Melon Contest and the Watermelon Carnival Train Tracks Pork Attack will still be held, but will be closed to the public. The events will be live-streamed.

“We’re very proud of it. Especially right now, it’s something positive to think about,” Eubanks said. “We have canceled this year’s carnival, which is not anything we had ever planned to do. So, therefore we’ve got this negativity of that going on, but we’ve got this positivity of (the world record) going on, which is hopefully something everybody will give positive feedback to.”

With no watermelon-eating contest taking place in 2020, Eubanks said they will probably not hold the event in 2021 at the same magnitude as they did in 2019 – only when someone comes for Water Valley’s watermelon crown will they try again.