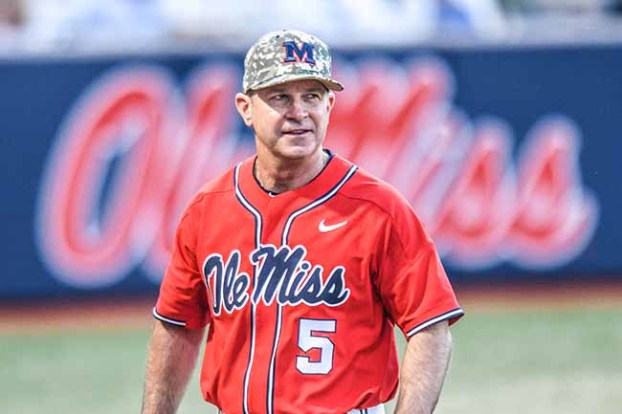 Ole Miss head coach Mike Bianco looks out at an umpire dying the game against Texas A&M at Oxford-University Stadium in Oxford, Miss. on Friday, April 26, 2019. The school announced on Tuesday they had extended Bianco's out to the four-year maximum.(Bruce Newman, Oxford Eagle via AP)

Mike Bianco will be sitting in the Ole Miss dugout at Oxford-University Stadium for a little while longer.

The school officially announced it extended the contract of the Rebels baseball coach, making it a new four-year deal. Four years is the maximum length allowed for contracts of collegiate coaches by Mississippi law. The financial details of the contract were not immediately released.

Bianco, the longest-tenured coach in the Southeastern Conference among the three major men’s sports, was in his 20th season at Ole Miss this year.

“Mike is one of the best baseball coaches in the nation, and this contract is intended to ensure he remains a Rebel for a long time,” said Ole Miss vice chancellor for intercollegiate athletics Keith Carter. “Year in and year out, Mike has established Ole Miss as one of the premier programs in college baseball, and I don’t think there is a hotter team in the country heading into next season.”

Following the conclusion of the 2019 season, Carter opted to not renew Bianco’s contract and wanted to evaluate certain things including postseason performance.

Prior to the 2020 campaign being cut short in March due to COVID-19, the Rebels were riding the longest active winning streak in the nation at 16 straight victories after losing their season opener to then No. 1-ranked Louisville.

During his two decades in Oxford, Bianco has become the program’s all-time leader in wins with an overall record of 767-440-1, giving him a .635 winning percentage.

Last week, Bianco was named the 2020 National Coach of the Year for Division I by Collegiate Baseball.

“Camie and I are very appreciative of the support from Chancellor Boyce, Keith, the IHL Board of Trustees and our Foundation Board of Directors,” Bianco said. “We’ve missed playing in front of the the best fans in America, but we know the health and safety of everyone is more important than baseball. I look forward to getting back on the field with our guys at the appropriate time and building a 2021 team that will make Rebel Nation proud. Thank you for the opportunity to continue to lead Ole Miss Baseball.”

In 19 seasons at Ole Miss, Bianco has led the program to 16 postseason appearances, including six Super Regional berths and a trip to the College World Series in 2014. The Rebels have hosted nine NCAA Regionals during Bianco’s tenure. Ole Miss has won at least 30 games in all 19 seasons under Bianco.

Attendance was on pace for a record year in 2020, setting a new season ticket sales record for the second straight season with 7,313 tickets sold, shattering the record of 7,254 sold in 2019.

Nobody knows how the college football season will look, or if it will even happen, but Ole Miss is beginning... read more