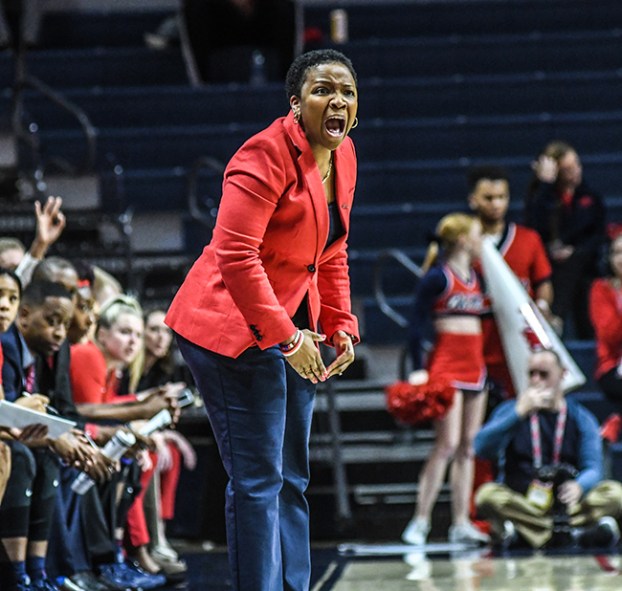 Mississippi head coach Yolett McPhee-McCuin reacts during the game against Tennessee at the Pavilion at Ole Miss, in Oxford, Miss. on Thursday, January 9, 2020. It was announced on Thursday that Ole Miss will host Kansas this season as part of the 2020 SEC/Big 12 Challenge. (Bruce Newman, Oxford Eagle via AP)

The Southeastern and Big 12 Conferences jointly announced the lineup for the 2020 women’s basketball SEC/Big 12 Challenge on Thursday, and it featured a big matchup for Ole Miss.

The Rebels will host the Kansas Jayhawks for the first time in program history as one of the 10 games taking place this fall. A date and time for the game will be announced later, along with the rest of the Rebels’ non-conference slate for the 2020-21 season.

This will be the third time Ole Miss has participated in the Challenge. The previous two times were in 2016 when the Rebels traveled to No. 16 West Virginia and in 2018 when they hosted TCU.

Ole Miss has played the Jayhawks two previous times, and has an overall record of 2-0 in the series. The Rebels first win came in 1988 at the Aruba Sunshine Shootout in the Virgin Islands, with a 61-40 victory over Kansas. The second win occurred in 2006 during the first round of the WNIT with a 78-76 win over the Jayhawks in Allen Fieldhouse.

The other nine games in the 2020 Challenge are:

Monday was supposed to be selection day for the 2020 NCAA Baseball Tournament, as well as the day after the... read more