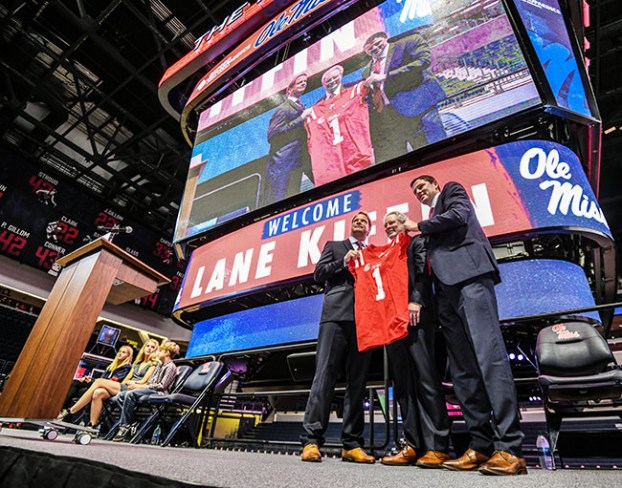 Lane Kiffin, left, with Chancellor Glenn Boyce, center, and athletic director Keith Carter, is introduced as the new head football coach at the University of Mississippi at a press conference at the Pavilion at Ole Miss, in Oxford, Miss. on Monday, December 9, 2019. (Bruce Newman, Oxford Eagle via AP)

Sports are currently not taking place, but Ole Miss provided some excitement off the field earlier this week with the announcement of the home and home football series with Southern California.

Keith Carter was a guest on this week’s virtual Reb Talk on Thursday and spoke about the upcoming series during the 2025 and 2026 season, how those games came to be and head coach Lane Kiffin’s input toward them being scheduled.

Ole Miss’s vice chancellor of intercollegiate activities referenced the previous home and home series the Rebels had with Texas during the 2012 and 2013 seasons as one of the reasons the games with USC were booked.

“You look at that Texas series that we had. The home and home that we had with them and how successful that was,” Carter said. “We won one and lost one, but both fan bases and both programs really enjoyed that, and it was really cool to kind of have a storied program come to Oxford and we got the chance to go to (Austin). We’re going to look to do that from time to time. You’re not going to play a team of that caliber or that magnitude every year, but I think if you can throw one of those in every five or six, seven years, I think that’s a really cool thing.”

The Rebels will travel to Los Angeles for the first time in program history to take on the Trojans at Los Angeles Memorial Coliseum on Aug. 30, 2025. Southern California will make their first trip to Oxford the following season on Sept. 19, 2026.

Kiffin is the tie that binds the two programs together, having spent two stints at USC as an assistant coach and a head coach. Carter said the scheduling of the two games happened “kind of quickly,” with both teams looking for games. Ole Miss must appease the mandate of one Power 5 game outside of their Southeastern Conference schedule each year as well.

“(There is) the underlying storyline of coach Kiffin and kind of the way things happened out there,” Carter said. “He had a really cool experience as an assistant coach, won some national championships then comes back as the head coach and maybe not the ending that he wanted. So, it’ll be interesting to go out there and them come here.”

Carter said Kiffin basically gave them the “go ahead” to sign the games, but noted football scheduling is done more at the administrative level more so than some of the other sports, such as baseball and basketball. He also hinted at some other future game announcements being made in the coming weeks.

The topic of potentially bringing back student-athletes to campus and reopening facilities for summer workouts was also discussed during Carter’s time on the show.

On Wednesday, the NCAA Division I Council voted to reopen facilities for voluntary workouts for football, men’s basketball and women’s basketball athletes on June 1. The workouts would be very minimal in terms of using sports-related equipment, but it is the first step in getting college sports started back on schedule this fall.

The SEC is scheduled to take a similar vote on Friday with presidents and chancellors regarding the reopening of their facilities on June 1 as well. The vote only gives each university to open on June 1, if the vote passes, but they can reopen on their own schedule. If allowed, Carter said he anticipates implementing the Rebels’ reopening plan in early June.

“We are looking at hopefully getting our staff back maybe around that June 1 timeframe, and then working on a plan and phasing in getting our student-athletes back and hopefully having them ready to roll by July 1,” Carter said. “It’s happening fast. There’s a big vote on Friday with the presidents and chancellors of the SEC to see whether or not they’re going to extend that May 31 restriction of having student-athletes on campus in our facilities. My gut tells me that hopefully we’ll be able to have some relief on that and can start getting our folks in here June 1. It’s exciting.”

Carter’s entire interview with David Kellum and the rest of Thursday’s Reb Talk can be seen below:

Kiffin: Coronavirus “magnified” challenges of being a first-year coach

Lane Kiffin has been laying low, along with others who are quarantining and self-isolating from the threat of coronavirus, leaving... read more