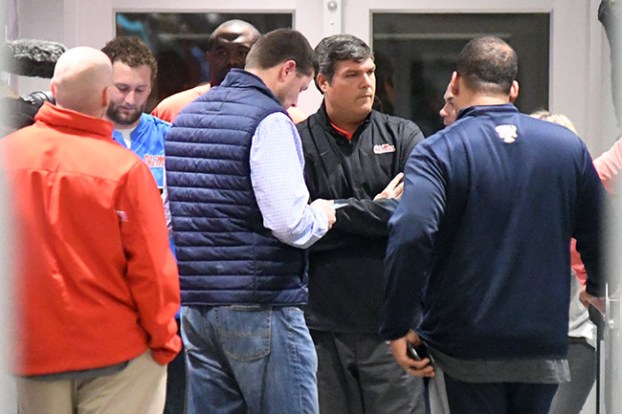 Matt Luke waits to walk into the team meeting room to talk to players in the Manning Center, in Oxford, Miss. on Sunday, November 26, 2017. Luke was named Ole Miss new head coach Sunday after being interim head coach the past year.

Ross Bjork had a head start on his search for Ole Miss’ next football coach.

He was afforded that when Hugh Freeze got caught up in an escort scandal and had to shockingly resign after five seasons as the Rebels’ coach in July. Ole Miss also hired a firm, Turnkey Search, to assist during that time, paying thousands of dollars for outside help to conduct what Ole Miss’ athletic director said would be a national search to find Freeze’s replacement.

So naturally Bjork’s search for the coach that would pick up where interim coach Matt Luke left off ended Sunday night with … Matt Luke.

Maybe Bjork knows something nobody else does. Perhaps he knows what the NCAA’s final ruling is in the program’s infractions case and knows it’s bad. Maybe he thought his best bet was to ride this out with Luke and see what condition the program’s in when it’s not littered with sanctions.

Otherwise, the decision to replace Luke’s interim tag with a permanent one seems like an emotional one. It’s certainly a risky one.

One thing nobody can question is Luke’s passion or desire for the job. The multi-generational Rebel has repeatedly called Ole Miss his dream job and still gets emotional when talking about it. Talk to any of Ole Miss’ players, and they’ll tell you his belief in them helped the Rebels muster enough motivation to finish .500 in a season where there wasn’t a whole lot to play for with a bowl ban in place as part of the school’s self-imposed sanctions.

But passion and desire don’t consistently win football games. Luke deserves credit for stabilizing the turbulence he inherited and not letting things spiral out of control, but there were some rough spots. The Rebels lost a halftime lead at Cal, were completely overwhelmed by Auburn and Alabama and blew a 24-point lead against Arkansas, the only team to finish below the Rebels in the SEC West standings.

For every fan that approved of Bjork’s decision to keep Luke around, there were those on social media and message boards who were baffled to find out Luke got the permanent gig, and it’s hard to blame them considering Luke’s non-existent track record. Not only had he never been a head coach before moving into his interim role, but he’d never even been a coordinator in nearly two decades of coaching.

Yet that’s the best Ole Miss could do?

South Florida’s Charlie Strong, Memphis’ Mike Norvell and Texas-San Antonio’s Frank Wilson were all reportedly vetted by Bjork. N.C. State’s Dave Doeren, SMU’s Chad Morris and Florida Atlantic’s Lane Kiffin were among those bantered about, though only Bjork knows how serious any of them were as candidates if at all.

The NCAA investigation, which is still awaiting its conclusion in the form of a final verdict being handed down by the Committee on Infractions, undoubtedly turned some candidates off to the job. Still, millions of dollars a year coaching in the SEC attracts plenty of suitors, so why not see if you can get one that’s got more experience running his own program?

Luke also would’ve taken this job Sunday or two Sundays from now, so why make this move so soon?

It doesn’t matter now. Bjork’s made his choice, and there’s no going back.

Luke’s first order of business will be to make whatever staff changes he feels are necessary to surround himself with assistants who are just as much of relentless recruiters as they are coaches. Ole Miss has to navigate the scholarship restrictions it already has and any more that may be coming in order to efficiently restock a roster that’s short on SEC-level talent, particularly on defense, and parlay that into more wins.

Bjork’s decision was a gamble, but if Luke can do that, he’ll silence the critics. If not, Ole Miss could find itself back in this same spot a few years from now.

Against all odds, Ole Miss revels in Egg Bowl win

STARKVILLE — Thanksgiving night wasn’t supposed to play out like this. It just wasn’t. Mississippi State came into the latest... read more