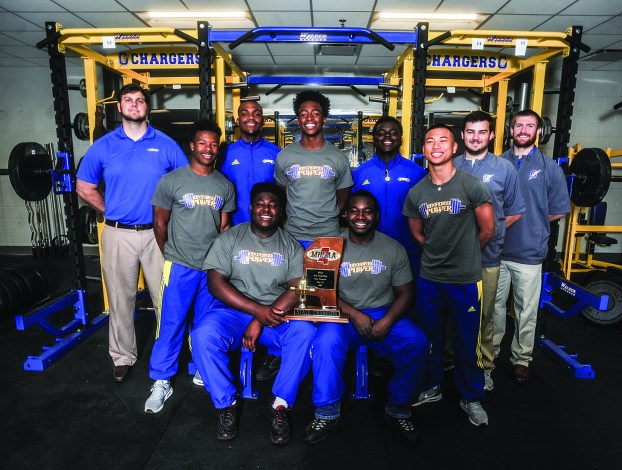 ANOTHER ONE: Final lift give Chargers fourth straight state championship

How the Chargers did it made it perhaps the most satisfying of them all.

The Chargers nipped Ridgeland to claim another MHSAA Class 5A title at the state championships at the Mississippi Coliseum in Jackson, eeking past the South champion Titans on the last lift of the day-long meet. It came from senior Jacquez Neilson, who used every ounce of strength he had to dead lift a personal-best 640 pounds to take first place in the super heavyweight class (308+ pounds) and push Oxford to a dramatic 39-37 victory.

“Somebody made the statement that if a fly had landed on the bar, he probably would not have gotten it. And I think they might be right,” Oxford coach Jason Russell said. “It was every bit that he had.

Oxford kept its title streak intact despite qualifying just seven lifters, the smallest number it’s had at the state meet since starting its run in 2013. The Chargers also trailed 30-14 after the morning session because eight of Ridgeland’s 10 lifters fell in the weight classes that competed then as opposed to just two for Oxford.

But each of Oxford’s lifters medaled to allow the Chargers to catch up.

“(Ridgeland) really had the advantage with the numbers coming into the meet,” Russell said. “In order for us to win, our guys basically had to do everything right and everything perfect. That’s exactly what happened. We took seven lifters down, and all seven guys came back with medals around their necks. That’s the only way we won (Saturday). It was a complete team effort, and every guy did their part.”

Russell admitted certain performances stood out in the meet, which combined each lifter’s weight in the bench press, squat and dead lift to determine a winner. Le set a 5A championship record for the most combined weight for a lifter in the 132-pound weight class while Neilson benched 375 pounds, squatted 550 and saved his best lift for last with the pressure on.

“This is a special one because of the fight that it took to get it and how tight it was down the line and the way our guys had to perform,” Russell said. “There really wasn’t any margin for error, and I think any time you win a close game or a close contest like that, it just makes it a little bit sweeter.”

Lady Chargers
Oxford’s girls qualified four lifters for the MHSAA Class III meet with each of them earning a top-4 finish.

Russell said it was a positive development for the girls’ team, which is working to eventually compete at the same level as the boys.

“Our goal is to contend for state championships with our girls’ team as well,” Russell said. “We definitely took a step in the right direction bringing four girls to Jackson this year. I thought we had one of our better powerlifiting meets that we’ve had in a long time with our girls’ team, and I’m really proud of how they competed.”

SETTING THE TONE: Bishop’s complete game leads ‘Dores past Ripley in 2-4A finale

The game held little meaning for postseason implications as the seeding between the Ripley and Lafayette baseball teams had been... read more