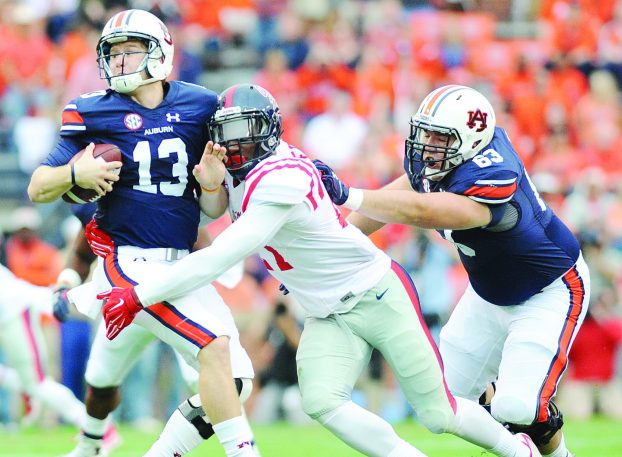 AUBURN, Ala. — The Ole Miss defense was a key factor in Saturday’s 27-19 win over Auburn. Its efforts shone particularly bright in the red zone against the Tigers.

The Tigers had three drives stall inside the red zone at the 6-, 16- and 9-yard lines in the second half. All three of those drives ended in made field goals instead of touchdowns.

“We won in the red zone,” Wommack said. “It was disappointing to give up some of those big plays because the game did not have to be that close. I thought our guys just bowed their back and did what they had to do.”

In its past two outings, the Rebels’ defense has been able to hold Texas A&M to 192 yards and Auburn touchdown-less inside the red zone. Wommack stated that the defense has gained back some of its confidence in the past two weeks.

“I think that we were so disappointed a couple weeks ago in the way we were playing,” Wommack said. “I really loved the come to Jesus meeting that we had that Sunday (after the Memphis game) and the way the seniors stepped up. And they have acted on it, it has not just been words, it has been things that they’ve gone and accomplished.”

When speaking about getting things cleaned up defensively, Wommack says getting impact players healthy has been beneficial to the defense’s cause.

“I think getting some guys back has helped as much as anything,” Wommack said.” Hopefully we will get Tony (Conner) back next week, which would help even more. I don’t want to blame our struggles on injuries, but it has certainly played a factor.”

Safety Mike Hilton, who finished the game with four tackles and one hurry, attributed the red-zone stops to toughness.

“We were just manning up,” Hilton said. “We will give up field goals rather than touchdowns. We would rather give up nothing at all, but field goals hurt less than touchdowns. That’s something we have been thriving on, the fact that nobody scores on us in the red zone, and I think we did pretty well today.”

Defensive tackle Robert Nkemdiche said after the game that goal-line situations are a focus for the defense.

“In practice every week, we make sure we have gotten our goal-line stuff in order, and when it’s down there, it’s crunch time,” Nkemdiche said. “You don’t give up anything and that’s our goal, to stop them if they get in the red zone and to just keep fighting.”

The Commodores of Lafayette High School celebrated their Senior Night with a 50-8 victory over the Byhalia Indians on Friday... read more