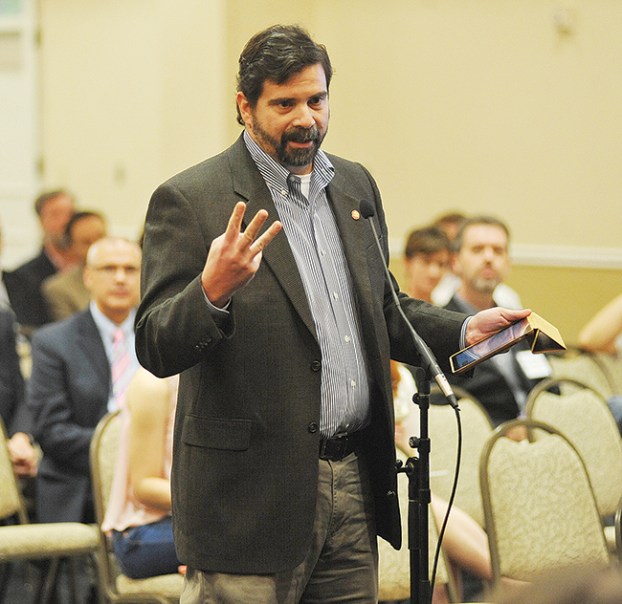 Dr. Joseph R. Gladden III, director of the National Center for Physical Acoustics, addresses a search committee tasked with hiring the next chancellor for the University of Mississippi, during a listening session at the Inn at Ole Miss, in Oxford, Miss. on Thursday, August 27, 2015. Alumni, faculty, and staff are able to address the search committee to express their views on what qualities they are looking for in a new chancellor. (AP Photo/Oxford Eagle, Bruce Newman)

Members of the State Institutions of Higher Learning Board of Trustees were back on campus Thursday for Round 2 of the University of Mississippi’s chancellor listening sessions.

Board members heard from UM students, faculty, staff, alumni and community members inside The Inn at Ole Miss ballroom.

Joe Ward, a history professor, said he’s been with the university since the mid-1990s and has witnessed tremendous growth and change that has led to an “overall energy and excitement” about the university.

He said he would like to see a unifying leader.

“Students are coming from all over,” Ward said. “They are driving from Virginia. They are driving from Wisconsin to come and visit us on a Saturday. I asked one of my colleagues who has been here since the late ’60s what he thought was going on, and he said ‘We’re finally normal.’” Ward said he feels the university missed out on a big wave of growth from the 1950s through the 1970s because of well-documented civil rights turmoil that occurred on campus during the university’s integration.

“I do think we’ve come out of it,” he said. “I’m not from around here, and I’m very happy to be here. I just hope we have a chancellor who will move us forward and make this a place that welcomes everybody. I think as we’ve become more diverse, we’ve become a stronger university. We can’t go back.”

Lynette Johnson, who works in athletics, has been with the university since 1989. She told IHL board members that she has watched the university become a destination place.

“Back to what Joe is saying — many years ago, we were a stop on the path to a better job, a better place, more money, whatever that may be,” she said. “And I think all across the campus right now — from athletics, to academics, to this position that we have arrived at — we have become a place where people want to be.

Eloise Tyner, 20, is a junior who studies public policy leadership and Arabic. She said she’d like to see a chancellor like the previous chancellor, Dan Jones, who will encourage students.

“From my point of view as a student raised in Mississippi, a lot of the time there is a very strong message from a lot of the media that you are lesser, and that you will not be able to perform on the same level as other people in the country,” she said. “And from the moment I set foot on this campus, it’s been made clear that’s not true by the high expectations set forth by the faculty and by Dr. Jones.”

Tyner said Jones and other faculty have made it clear that every student is worth the investment. She’d like to a see a chancellor who sets the bar high and encourages students to reach for it.

“Every faculty member has told me to think bigger,” she said. “And I’ve thought, without a doubt, that there was a big cheerleader for all of the students in the Lyceum. I would love to have another cheerleader in the Lyceum for every student.”

IHL board member Ford Dye said they have listened to the opinions of many people, and he has concluded that it may be impossible to please everyone.

“If we could find a fundraising doctor, who was a professor of history that played professional football too and went to Ole Miss, but now he’s president of Harvard,” he joked. “I want to find the best person for this position, and that’s what we are going to try to do.”

Dye said they will eventually narrow a list of candidates down to six to eight people to interview, and they hope to have a prospective chancellor by the end of the year.

LaReeca Rucker is a writer, reporter and adjunct journalism instructor at the University of Mississippi's Meek School of Journalism and New Media.

A veteran journalist with more than 20 years of experience, she spent a decade at the Gannett-owned Clarion-Ledger - Mississippi's largest daily newspaper - covering stories about crime, city government, civil rights, social justice, religion, art, culture and entertainment for the paper's print and web editions. She was also a USA Today contributor.

This year, she received a first place award from the Mississippi Press Association for “Best In-Depth Investigative Reporting.” The story written in 2014 for The Oxford Eagle chronicles the life of a young mother with two sons who have epilepsy, and details how she is patiently hoping legalized cannabis oil experimentation will lead to a cure for their disorder.

The Overby Center for Southern Journalism and Politics at the University of Mississippi will begin its ninth year of programming by... read more